When you think in terms of Service Oriented Architecture one of the tricky things is to decide how to organize your development workflow in order to develop architecture, not a single application: for example, how would you configure deployments (when you need to deploy part of your architecture, not just a web application) or push cross-service features to your SCM?

This article gives an overview of the constraints and preferences that we wanted to implement in our SOA, which is mainly done with Symfony2, but most of it can be read in a framework/language-agnostic key.

We can at least identify 3 problems which pop up after you decide to layer your architecture and avoid a monolithic approach:

As I stated earlier, the solution is to be able to specify, upon deployments, which services need to be updated, and your best friend, here, could be something like Capistrano.

If you ever worked with capistrano, you know that deployments basically depend on the deploy.rb file, in which you can configure different stages of your architecture:

In the example, weare declaring that our application can be deployed on 2 stages, live and staging; by doing a cap live deploy or cap deploy you are ready to either deploy to your live servers or staging ones, after configuring the staging files (live.rb and staging.rb):

This still doesn’t solve the problem of just deploying a single service, but to overcome it, thanks to the capistrano multistage extension, it’s a matter of configuring a few deployment files.

For example, here’s how you would write your deployment files once you have a couple services (A and B):

As you see, we are creating a few different stages:

For Symfony2, to ease your job, you can use capifony which takes care of configure the remaining, specific, crucial parts of the deployment for the framework (such as clearing and warming up the cache, installing the dependencies via composer and so on).

Let’s say your are working on a traditional, monolithic application: you branch to implement a new feature, commit, push, open a pull request, the PR gets merged, deployed on staging, tested and then goes to live; very simple as well as efficient: zero overhead.

You might think that in SOAs this is not different: you cd into a specific’s service repository, branch to implement a new feature, commit, push, open a pull request, the PR gets merged in that repository, the service gets deployed on its staging servers, tested and then goes to live; very simple as well as efficient?

Thing is, often you will need to develop cross-service features, which require code to be updated in N different repositories: as a result, you will need to open N pull requests; if you think that this is not a problem, consider what happens once you pack and test everything and are ready to go live: a critical bug is found, and it couldn’t have been discovered earlier since it just happens due to some specific configuration that you have on the live environments: time to rollback N new services.

Since rollbacking is a very critical operation2, you want to rollback each of the affected services separately, which makes your downtimes N times slower than a usual, monolithic rollback: in these cases, to be on the safe side, being able to rollback the entire architecture is a must.

That’s why I would advice to keep all of your services under one repositories, to avoid overheads:

Due to this, honestly, I don’t really see the need of separating services into different repositories: when you deploy, you deploy a tag of the architecture itself (only on the servers which host the services to be updated with that tag), when you rollback, you rollback the entire architecture to a specific version. 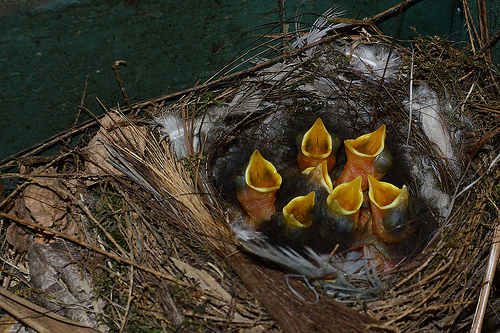 This seems to go against what I preached earlier, while talking about deployments, but the truth is that you want to be on the safe side once something goes wrong: you can optimize deployments so that you can just deploy some services, but in case of rollback, you need to take an immediate, “total” action to restore all of your services.

Consider the situation from a very similar perspective coming from a very, very different context: cultivate an healthy colony of newborns in nature – as opposed to maintaining an healthy architecture on the internets.

Exactly like the mom of newborn birds, when it comes to feed (update) them, you would give the weaker ones, in order to help them develop as healthy as their stronger brothers, the biggest meals; but when it comes to rescue (rollback) them from a predator, you would crave for having an option to move them all in one go, without the risk of moving them one by one, leaving the unluckiest ones defenseless against their own fate. 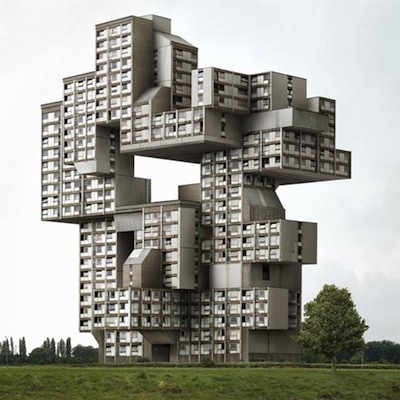 This post has to come to an end dealing with Symfony2, since, in our experience, we have decided to go SOA with this framework: all in all, we found that due to the integration with capistrano and the concept of bundles, together with the ability to have per-bundle specific hostnames, this framework is pretty friendly towards the ideas and constraints that we want to implement in our SOA: what we’ve seen is no rocket science, and even the approach that we are using with Symfony2 is nothing extraordinary, but it helps maintaining a very clean and efficient workflow while developing a SOA.

As I said, for deploying you might want to use capifony, and when it comes to isolate services in just one repository we realized that a good solution would be to have one Symfony2 application and create a bundle for each service that we need.

Thanks for the capabilities of Symfony2’s routing mechanism, you can also bind a subdomain to a specific bundle; once you create the bundle, you can tell symfony that the routes of that specific bundle can be matched only if the subdomain of the application matches a particular string:

In this case, the route mycompany_service_a_index will only be matched when the URL is using the hostname service-a.mycompany.com: for example, http://mycompany.com/index/param won’t match it; this is pretty interesting since it gives you the flexibility to develop features in just once repository, on as many services as you want.

We are still heavily experimenting, but out of a few approaches – for example route prefixing – we decided to go on with the ones I explained here for cleanness, clarity, efficiency and security of your development cycles and architecture: if your experience suggests something different or you want to share doubts, feel free to abuse of the comments section, since I am very open and interested to discuss this topic.