Everyone knows that I am a big fan of the Symfony2 ecosystem, and going SOA with this framework was a very trivial decision for us at Namshi; all in all, besides personal preferences, there is a plethora of reasons to choose this framework among the others available in PHP, so I am going to list the most important factors that influenced our decision.

Believe it or not, all of the following factors matter first for the business, then for the developers.

We are firm believers in automated test practices, and providing a layer that integrates very easily with testing tools (such as Behat or PHPUnit) is a must for us.

Symfony2 is a testing-prone framework because:

At the end, you can see how Symfony2 and the ecosystem around it provide the proper toolset to run unit, functional and behavioral tests. If you do care about testing, this is already a huge point: we can’t afford our developers to waste a huge portion of their time doing manual testing, and we don’t want to increase overhead to build a manual QA team; since we are a technology startup, we should take advantage of technology to automate expensive tasks that harm the business, like manual testing1.

I kind of had so much fun when, while still working with symfony 1.4, I saw people developing with frameworks like Yii or Zend Framework 1, beating their heads on their desks tying to understand which view to modify, var_dumping SQL queries to output them and so on: symfony 1.4 already had a very powerful debug toolbar that would present all of these informations in order to ease debugging.

Symfony2 goes beyond what we had before, providing a way more powerful, extensible toolbar and an integrated profiler. 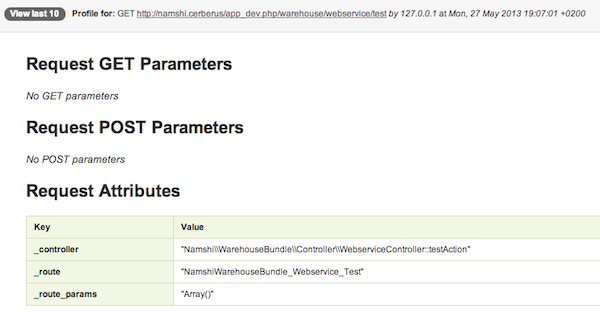 Database inspection will let you realize how many queries you are running and see the SQL of all of them, with a nice overview of the time they take, while the profiler itself includes informations about every step of the application: for example, with Joomla, can you tell this easily how long it took to render a particular view and how much memory was used to execute a controller’s action?

Now, imagine each of your developers (let’s say you have a team of 6), spending 1 hour (very conservative estimate) out of 40 (a working week) trying to obtain informations that debugging tools natively give you: it’s almost a day per week; multiply that day for 52 weeks in a year and you will end up loosing one of your developers for two moths.

We all honestly can’t afford to let a guy leave the company for 2 months for free, so why would we keep using counterproductive tools?

It is no news that we, at Namshi, are working with a Service-Oriented Architecture, and we are highly benefiting from the easy integration that Symfony2 provides for Doctrine.

One of the rules of thumb of designing SOAs is that you can provide access to the same data source to different services: in simple terms, instead of talking via webservices or messaging queues, services can simply access the data stored somewhere by other ones. 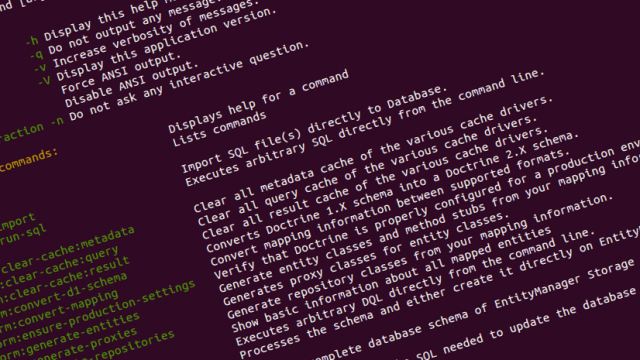 Well, Doctrine 2 is the cherry on top of the cake to access that somewhere: natively providing support for multiple DB connections and object-relational mappings, you can safely use this tool, within Symfony2, to handle read and writes to different databases without polluting the domain model of each of the services that take advantage of Doctrine; in addition to this, I should enumerate the huge list of good things that working with a data mapper like Doctrine 2 brings on the table.

On another note, sharing the data model among different services helps you overcoming though situations where webservices or messaging queues are not enough: think about a service which, due to an update, needs to modify half a milion records that “belong” to another service; of course, istantly having 500k messages in a queue implies a long, very long time to process them, while a webservice might not be fully ok with sending a huge payload over the HTTP protocol – and, moreover, how do you start testing this feature, when your developers need to send a lot of MB through their browser? It is painful, believe me.

At this point, the ability of directly accessing different DBs come out as a swiss-army knife, as you can directly execute the 500k updates, in batch, from the original service.

Symfony2 has an out of the box integration with Capistrano, the most popular automated deployment tool in the market.

This means that you should forget about wasting time, money and energy to develop your own in-house solution to automate deployments or, even worse, rely on manual procedure, which are prone to errors where it hurts the most, on the “live server”.

Let’s say that you, for example, are using Graylog2 to handle logs in your application: while you are developing locally, you won’t have a graylog2 server to connect to, since it might be that you want to keep your machine a bit cleaner and you might find more useful to read local logs from a file in the filesystem, or directly output them to the browser.

In Symfony2, thanks to the dependency-injection container, you can define the logger as a service:

and, for development environments, you can simply override the configuration in the config_dev.yml file:

This will allow you to output errors that would normally go to graylog2 directly to the developer’s browser, easing debugging when you can afford to display errors in the browser – thing that is not possible who’s viewing your application is a potential customer.

Apart from all the technicalities involved in using a DIC, I would like to focus on one point: again, simplicity and speed to implement a solution to a problem (having different log handlers depending on the application’s environment, in this case) are a winning factor for your development team, which is translated in more productivity for your company.

When we kickstarted our first Symfony2-based service in our architecture, we decided to meld together 2 applications that support our CRM and ERP systems: being inside Symfony2, these layers are fully isolated in separate bundles, giving us the ability of phisically decoupling them in 2 installations in a matter of minutes.

Bundles are probably one of the most powerful concepts of Symfony2, since they are micro-applications inside your main application: being able to totally separate logics from different domains helps you in keeping a clean separation of concerns and autonomously develop every single feature of your domain.

After your first look at this code, you already know what it is doing: now imagine that your team of developers need to, instead, try to understand how the Drupal framework works.

I’m far from saying that Drupal sucks, but some questions rise into my mind:

See, you don’t want your developers to have to go through an entire application to understand what a piece of code does.

Symfony2 is a framework made to take advantage of clean and clear tested patterns as well as tools to improve the final developer’s productivity: imagine your team, working six months on this framework; how much would they learn? How many structural changes would they be able to do on your application without introducing regressions?

For startups, by the way, a huge plus comes from the fact that being highly decoupled, Symfony2 helps when you want to drastically replace a piece of software, or an adapter, with another one: for example, thanks to the dependency-injection container, you would be able to replace application services with others that have the same API, but a different implementation.

It is clear enough that Symfony2 provides the flexibility you need to reach a very short time to market and increases your developers’ awareness and efficiency by giving them the guidance and the tools they need to care about the domain of your services and not about how many bugs they would introduce by changing an untested piece of code.

All in all…is it Symfony2?

A very simple question that you should ask yourself at the end of this reading is: but, all in all, is this all thanks to Symfony2 or its surrounding environment?

It is its surrounding environment, which was born thanks to the framework itself: when Symfony2 was released, no other framework had the same level of quality that the open source product from SensioLabs could offer; a natural effect of this was that the majority of well-known open source PHP developers got amused by this framework and embraced its way.

Basically, Symfony2 is a framework chosen by the community, thus it can take advantage of all the efforts of the OS developers around it: from automated deployment tools to fully integrated ORMs, from testing frameworks to tutorials and best practices, through native, advanced debugging tools, Symfony2 is, as of today the most complete framework available in the PHP ecosystem when you take in consideration learning curve, integrations, stability and performances (don’t forget that one of top 100 website in the Alexa rank is powered by Symfony22).

Can other frameworks do all of this?

For the benefit of your business, this is the main question that you should ask yourself.