Last year I dedicated quite some time, during ramadan, to a project I really cared about: building a fast and smart text editor to use on a daily basis.

That’s how Nikki was born, and today I am happy to announce that the project is dead, simply because I found another, very similar tool that does the job.

This is the story of how open source projects get born and die, and why we should still celebrate it.

I had been using PHPStorm for quite some time and I was happily paying its license since, in the PHP world, it seemed like no editor could match its features while performing that fast: the problem was that PHPStorm was still an IDE at its core, meaning that to be able to write a couple lines of code I needed to wait at least 10 seconds for it to boot the GUI, scan the current project, look for updates, cook dinner, do the dishes and whatever else it needed to do…

See, it’s been a while I changed job: at Namshi I’m no longer the guy who is going to implement long-term features or will need to spend a lot of time on a single, monolithic project; right now I am mostly kicking new projects off, adding small features, pairing or discussing with the team what kind of design to use and so on: most of my time is really spent in scripting over microservices which, in my opinion, rarely require an IDE, especially when they’re written in JavaScript.

At the end of the day our typical project looks very slim: if I compare the size of our initial API layer (a Symfony app with lots of bundles and abstraction) to our newest services (express apps with 10/15 files in total1) they look like night and day; our node microservices ain’t very complex and are quite self-explanatory: you won’t need to navigate through a lot of methods to understand the responsibilities of each module.

Want to make an API call? Just open api.js and see which methods are public:

This transition happened around a year and a half ago, and I started growing frustrated of PHPStorm as it wasn’t very helpful for my use-case: it was doing too much, taking too long.

Time to look for an alternative!

There were a few alternatives at that time:

but none of them felt “right”: either they didn’t have a vibrant community behind them or they simply lacked of coolness (I’m looking at you, gedit).

So far I couldn’t find a real winner amongst them, so I started thinking that writing a simple thingy on my own would have been a very good learning experience now that the new socket.io had just been released.

I mean, you can create editors in one line of code, how big of a task would this be?

That’s how Nikki was born: I put up some crappy frontend and made it talk with a simple NodeJS server that would have fun browsing, opening and modifying files on my machine.

I can’t say that the code was the best I’ve ever written (especially on the frontend :-P), but at the end of the day I got the chance to play with socket.io, dnode, learned how to “daemonize” a node process, played with the ACE editor and learned how to watch for file changes in Node (and the fact that this feature was quite unstable): I dedicated a lot of time to Nikki but I also practiced a lot with new tools and patterns, which resulted in me getting to know the platform and becoming more confident with JavaScript2 as the days went by.

I’m not lying: whenever I needed to start a new project or make some changes my terminal would look like:

and my browser would open on port 9123 and let me code in milliseconds: how nice it felt!

Of course, Nikki didn’t have a community behind it so features or bugfixes took me some time but, by using it on a daily basis, I made sure that it wouldn’t crash or misbehave — else I would have grown frustrated at my own child! 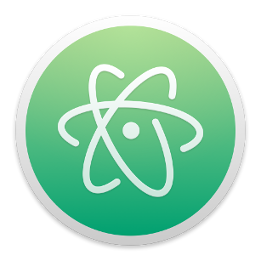 This went on for over a year: I think I was the only guy on the planet using it, and it still made me feel very proud as it fit my needs very well.

At the same time, I got very curious when I first heard of Atom as it felt modern (JavaScript) and cool (GitHub), though, as soon as GitHub released it, I realized it was still missing a couple things:

The first 2 points were quickly resolved: developers started to love the “hackable text editor” and the community beefed up in a very short span of time, meaning that the project could reach a stable version very quickly as lots of people were using and testing it3.

A working version for Linux came into existence after a few months, which meant that Atom was ready for me: then, one night, I decided to format my machine and give it a brand new life, a good excuse to try something new.

I installed Atom and never looked back: it behaves quite like Nikki4, has plugins, a well-tested ground and has a huge community of users / developers ready to help: this product makes much more sense. I am happily using it since a month or so and I totally love it: the way it uses shortcuts for a ton of things, “open in github”, the speed it takes to open up, how simple it is to customize…

…and here we are: now that Nikki is dead, was it a wasted effort?

I think, on a smaller scale, PHPStorm, Nikki and Atom represent a very common pattern in technology and Open Source: a cool project that doesn’t age very well, or needs to adapt to new technologies.

The same has happened with Solr, just a few years ago: ElasticSearch was born and Solr suddenly lost its coolness.

The same is happening with Python and Golang.

The same for the Zend Engine and HHVM.

Same for Ruby and NodeJS.

Might be that the same will happen for Graylog and Sentry.

The beauty of Open Source is that no one will prevent you from converting your ideas into working code: great engineers will develop a new product, the underlying technology will age and look less appealing in 1, 3 or 5 years and a new group of developers will pick those great ideas, patterns and implement them on their own, on a newer, different platform, to provide some competition to the “old guys”.

At the end of the day, I have 3 key takeaways from this experience:

With this in mind, I am still glad I wrote Nikki: it was a truly great learning experience.

And I’m still happy to trash it: it served its purpose, I knew its limitations and led me to another great tool.

And yeah, I’m super-excited for who’s going to challenge Atom.
That’s the way it is, the way it will always be.