I recently gave another read at my original post “REST better: HTTP cache” and I felt compelled to write a more in-depth dive into the subject, especially since it’s one of the most popular topics in this blog; at the same time, with the advent of new technologies such as sevice workers, people jumped into the bandwagon of offline applications without, in my opinion, understanding that the HTTP cache provides some basic but extremely interesting features for offline experiences — thus, I want to shed some light on one of the most ingenious sections of the HTTP protocol.

What is the HTTP cache?

First of all, let’s start by dividing HTTP into 2 entities:

So, for example, with HTTP/2 we have seen a revamped implementation, one that brings TSL by default, that turned plaintext messages (the way messages were exchanged in HTTP/1) into binary, along with the introduction of multiplexing (in short: one connection can channel multiple requests and responses) and the likes — HTTP/2 was a massive upgrade to HTTP and is making the web a much safer, faster place. At the same time, the spec itself didn’t change as much, as the semantics of the protocol have been widely unaffected by HTTP/2.

HTTP caching falls under the HTTP spec, as it’s simply a chapter that defines how messages can be cached by both clients & servers: the current version of the HTTP caching spec is RFC7234, so you can always head there and have a look by yourself.

The goal of the HTTP caching spec is, in short, to:

[…] significantly improve performance by reusing a prior response message to satisfy a current request.

or, as some smart guy once said:

As you might have guessed, the HTTP cache is there so that we hit servers as less as possible: if we can re-use an existing response, why sending a request to the origin server? The request needs to cross the network (slow, and TCP is a “heavy” protocol), hit the origin server (which could do better without the additional load) and come back to the client. No bueno: if we can avoid all of that we, first of all, take a huge burden off our servers and, second, make the web faster, as clients don’t need to travel through the network to get the information they need.

A side effect of HTTP caching is the fact that it makes the web inconsistent: a resource might have changed and, by serving a cached, stale version of it we don’t feed the clients the latest version: this is, generally, an acceptable compromise we, as developers, make in order to scale better. In addition, these inconsistencies can be avoided by tweaking the cacheability of our responses, and we will look at how to do that in the next paragraphs.

In defining mechanisms to implement this kind of performance optimizations, the W3C working group split caching into 2 main variants: expiration, which is simpler but very high-level, and validation, which gives you more granularity.

Let’s look at expiration first, as it’s the way we use HTTP caching on a daily basis.

This is the sort of caching you’re used to see every day, which allows you to specify TTLs (time to live) for static assets like JS, CSS & the likes: we know those assets are cacheable for a long time, so we specify an expiration date on those resources.

As I mentioned, expiration is generally used for static assets, but can be used for any kind of resource (ie. GET /news/1), so don’t just think caching is for content that never changes (such as a minified JS file).

How can we implement expiration though? Through 2 very simple HTTP headers.

The Expires HTTP header allows us to specify a future date that defines until when a resource should be cacheable:

If the client needs to fetch the same resources later on, it will first figure out if it has expired and, if not, use the local copy stored in the cache, without hitting the origin server. An example implementation might look like:

This is a very simplistic implementation, but should give you an idea of the process an HTTP intermediary (a browser, a proxy, etc) goes through when implementing basic HTTP cache through the Expires header.

If we want to get a bit fancier, we can use the Cache-Control header, which allows us more control over how a response should be cached; for example, here’s an HTTP response using Cache-Control:

Wow, that’s a lot of stuff to process, so let’s break it down:

So what directives can we use in here?

Most people think that the Cache-Control is a response header, whereas it can be included in HTTP requests as well — and the directives you can use are slightly different:

An ingenious trick, the stale-while-revalidate and stale-if-error cache-control directives are worth a mention on their own, as what they let you achieve is pretty interesting: 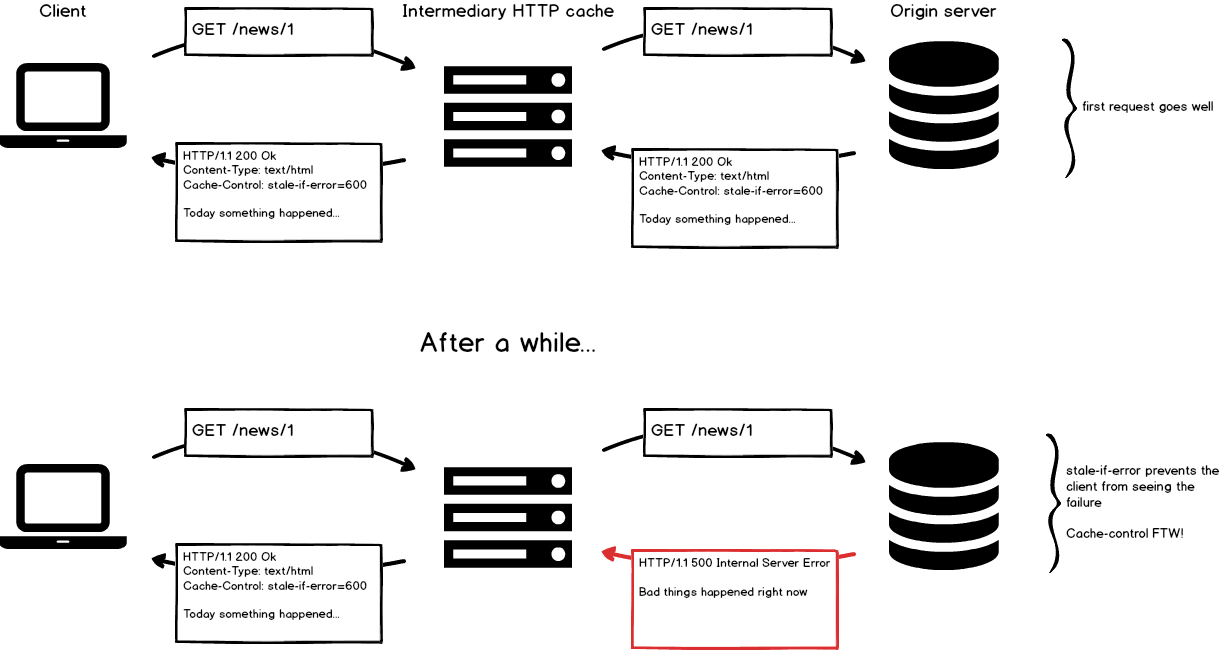 Funny enough, Chrome has been considering implementing this directive for quite some time, and last I heard it was still just under consideration, though it looks like it might never going to make it to Chrome Stable.

Cache-Control was introduced in HTTP/1.1, meaning there had to be some way to control caches in the olden HTTP/1.0 days — that would be the Pragma header.

Pragma doesn’t let you do much, as you can just tell caches not to cache through Pragma: no-cache — nothing too complicated here.

What’s interesting, though, is that a few HTTP clients will still consider responses cacheable if they don’t see a no-cache in the Pragma, and so the best practice to avoid caching has been to send both Cache-Control and Pragma:

At the same time, a peculiar use of Pragma is by telling HTTP/1.0 caches not to cache (via Pragma) while allowing HTTP/1.1 caches to do so (via Cache-Control):

Enough with expiration: it’s now time to move on to validation, a more expensive but granular way to implement HTTP caching.

Expiration provides a very interesting way to keep clients off the server, at the cost of serving stale content more often than we’d might like: in cases when that’s not an acceptable compromise you can use validation, as it ensures clients will always be able to receive the latest, most fresh version of a resource. 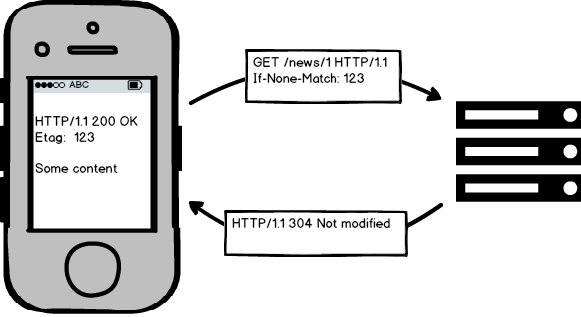 At its core, validation works in a very simple manner: when you request a resource, the server assigns a “tag” to it (let’s say v1) and the next time you request the same resource you include the tag in your request; the server, at this point, can quickly check if the resource has changed: if so, it returns the new version, else it tells you to use the cached version you should have with you.

In HTTP words this is how it basically works:

As you see, returning a 304 Not Modified is cheaper as it doesn’t contain as many information as the “real” resource: less packets traveling through the network, thus a faster response.

At the same time, calculating an Etag (the HTTP header used to tag resources) is generally cheaper than rendering your resource again — let’s look at some pseudo-code to understand what we’re talking about:

We have saved the server some extra work by not rendering the news template all over again: this might feel like a small saving, but put it in the context of thousands of requests every day and you see where we’re going.

Looking back at our second request:

you might be wondering what’s that If-None-Match, so let me break the whole process down for you:

A request that contains the If-None-Match header is called a “conditional request”: it’s expected to fetch a resource only if the condition it is sending won’t be satisfied (the condition is that the client’s etag matches the server’s).

Conditional requests and validation can be implemented with etags as well as dates: if you’re more comfortable using the latter (think of an updated_at column in the DB) you can replace Etag with Last-Modified and If-None-Match with If-Modified-Since:

Again, the spec is very simple and doesn’t get too fancy, yet it’s powerful enough to let you save so much time and data by returning 304 rather than “full” responses — that’s why I like the HTTP caching spec: it’s so clever and simple!

Who can cache my responses?

HTTP is a layered protocol, meaning there can be countless intermediaries between the client and the server — a picture is worth a thousand words:

So, who are all these guys that can cache resources all along the way?

An interesting header is Warning, as it’s used to signal that something went wrong when fetching the response from the upstream, something that’s hard to infer from the HTTP status code alone: for example, when the cache knows that the response being served is stale, it could include a Warning: 110 - "Response is Stale" to inform the client that the response he’s receiving isn’t fresh at all — that, for example, could happen when stale-while-revalidate or stale-if-error kick in:

A note on Service Workers

Here comes the fun part: if you’re a web developer chances are you’ve heard you should implement service workers in order to efficiently serve cached content, and that’s quite misleading — to be clear, you can have offline apps working without service workers, as when you tap on a link and that renders a response with, say, Cache-Control: max-age=3600, you can still open that page for another hour, without an internet connection.

Service workers give you a great deal of control on the network stack, allowing you to intercept HTTP requests being made, hijack them and, as many advise, cache them on-the-fly — but I’d honestly avoid doing so as you can achieve the exact same thing with the HTTP cache and way less code.

Let me rephrase it: if all you need is caching static assets or do expiration-based caching, do not use service workers as the HTTP cache gets the same job done. If you need some special functionality that is not included in the caching spec, then use a worker, but I’d be very surprised to hear you needed to: the contexts where you would be able to take advantage of the SW’s capabilities are quite advanced, and I could argue HTTP caching would anyhow get you ~95% there even in those cases. 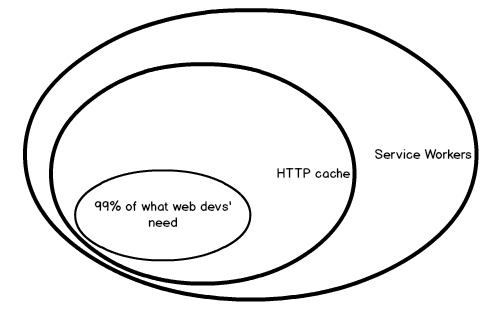 Service workers are great because they let us implement functionalities we traditionally never had on the web (think of push notifications, add to homescreen, background sync and the likes) but, for stuff that’s been there, I would advise to stick to the basics.

Let’s have a look at an example code from a service worker that implements its own caching — as you see not most straightforward code you’ll bump into:

As Jake Archibald, developer advocate at Google, puts it:

You can hack around poor caching in your service worker, but you’re way better off fixing the root of the problem. Getting your [HTTP] caching right makes things easier in service worker land, but also benefits browsers that don’t support service worker (Safari, IE/Edge), and lets you get the most out of your CDN.

Caching in HTTP has been here for almost 2 decades, it’s a battle-tested part of the protocol and allows you to efficiently trade freshness with scale (emphasis on efficiently): there’s no reason to implement our own application-level caches when the protocol we use to exchange messages allows you to do the same, for free, by just jamming a bunch of headers in your responses.

HTTP caching is truly the hidden gem of the protocol, and I wish more people would be aware of the inner workings of the spec — to me it is a great example of achieving great results without compromising on complexity, and this is the kind of design we should aim towards when building software.

If you enjoyed this article I would suggest you to read further stuff on the HTTP cache:

See you next time!