In the process of starting a brand new project here at DNSEE, me and my colleague Matteo decided – in order to make the whole team aware of how to test Symfony2 applications with PHPUnit – to port the Symfony2 functional testing mechanism into this project, which will be developed with symfony 1.X1.

Lime – as you may know – is the officially-supported testing “framework”: it was specifically built to be used inside symfony 1.X applications and introduced lots of developers to the whole idea of testing in PHP.

It’s a lightweight and simple implementation of a testing framework, with poor support for mock objects, test doubles, data providers and test isolation, but it does its job.

Since Symfony2 decided to move to PHPUnit – a serious and more robust testing framework – suddenly all symfony developers needed to learn PHPUnit in order to test the new applications: this – at least – didn’t happened to me, because I heavily faced PHPUnit developing Orient, with lots of WTFs – mainly my fault.

So, starting this new project, I asked the team if they would agree on using PHPUnit to functionally test this new symfony 1.4 application, for 2 main reasons:

In Symfony2 you basically instantiate your application with a fake client and make requests to it; at each request the application produces a response and a crawler lets you test the output:

So, as you see, PHPUnit is used to make assertions on the response body2.

So, to backport the mechanism illustrated in the previous chapter to symfony 1.X, we should rely on a DOM crawler and a browser, capable of making HTTP requests and parse subquent responses’ bodies.

Fortunately, symfony 1.X’s functional testing mechanism already relies on an internal browser , able to bootstrap the application and make fake HTTP requests3, so we only need to integrate this browser into a PHPUnit test and parse responses with a crawler: since Symfony2 is a well-decoupled set of libraries we will use its DomCrawler component.

First of all import the required libraries into your symfony project; using SVN, we updated the lib/vendor directory:

We are downloading the CssSelector component in order to use CSS selectors within the crawler: if you don’t want to use it you’ll need to write XPath queries to access the DOM nodes.

Save the externals file and commit, then update the lib/vendor/Symfony directory in order to phisically download the dependencies.

To finish the setup of the environment, create a phpunit.xml.dist file in the root of the symfony project:

and the test/bootstrap/autoloader.php file, used by PHPUnit for -guess it – autoloading classes:

At this point the environment is ready, and you can start writing your Symfony2’s correspondent WebTestCase class4:

So we’ve created a base class for every functional test we’ll write.

The browser that we are using is sfPHPUnitBrowser, instance of a non-existing class, so let’s create it:

This class extends the usual sfBrowser one adding a simple functionality: when a request is made, it does not return itself but an instance of a Crawler object.

This will let you do:

If you didn’t mistyped anything you should be able to create your first test:

Next, create a route for your homepage and render some dummy template:

Now you can run the test with the usual phpunit command: 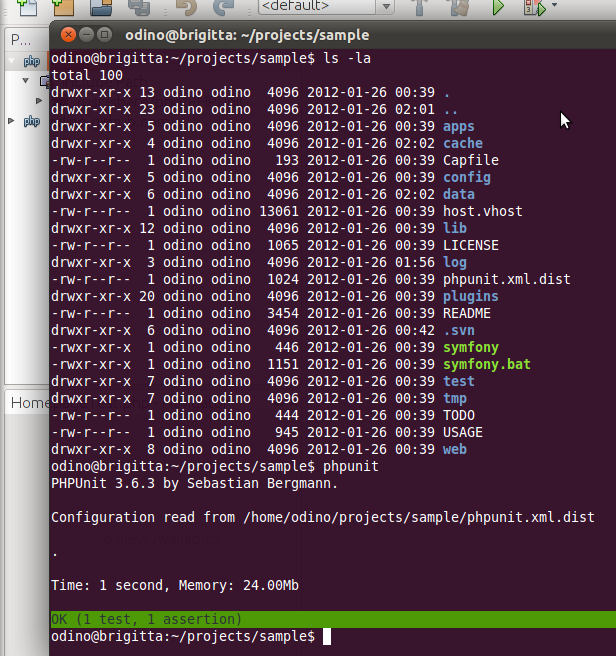 The greatest benefit of this approach is that you can use PHPUnit’s pure functionalities to test symfony 1.X applications without re-inventing the wheel: what we saw was the test of some output but bare in mind that, extending sfBrowser, our $client object is able to access the request and the user session too.

Why not re-using existing integrations?

Obviously, before writing any line of code, we took a look at existing PHPUnit’s integrations into symfony 1.X.

There are – basically – 2 plugins: