In the latest release of ABS, we introduced a package manager that fetches an archive from GitHub and installs it locally: like in many other command-line interfaces, we decided to add a “loader” to accompany the process, something that looks like this:

I want to take a moment to reflect on how we implemented the simple spinner you see in the video, a process that derives from typewriters and movies — let’s get to it!

We’re going to see a picture???

My wife usually refers to movies as pictures, something that leaves me confused as I’m not familiar with the term. But when you think about it, we’re often dealing with the same term in the context of award winning movies — who won best picture at the last academy awards?

This happens because movies, in their essence, are simply a collection of pictures stitched together, put in motion to give us the illusion of something happening in front of our eyes while, in reality, it’s just a very quick passing of images, aided by sounds, that trick us into believing a story is unfolding in front of our eyes.

Now, we said we wanted to create a command-line spinner, and you can probably see where I’m going already: we can borrow the very same concept of motion picture and apply it to the command-line — have a few different characters (pictures) that are swapped very quickly to give us the illusion of an animation, kinda like this:

Enter the speed at which characters rotate (in ms):

Now, it should be very clear what the mechanics behind spinners are, but we’re still missing one key element — on the command line, how can we “override” the previous characters? This is no HTML, where a simple document.getElementById("id").innerHTML = "myNewChar" does the trick, this is the CLI we’re talking about.

This example illustrates the problem we’re talking about: 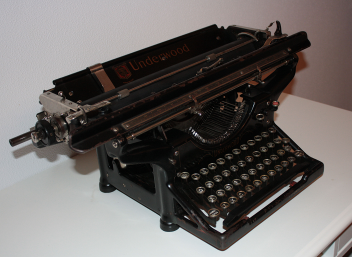 Hey there! Have you ever set your hands on an old-school typewriter?

If you say “it’s all good” rather than “it’s all gucci”, chances are you’re old enough to have, at least, seen one of them. I’ve personally never used one, but a mechanism they use is the basis of how modern terminals allow you to replace content inline.

This animation by Haley Schbeeb gives you a little bit more context — watch closely what happens when the typewriter reaches the end of the line:

It “resets”, right? This mechanism is called “carriage return” and it’s best explained by Wikipedia:

Originally, the term “carriage return” referred to a mechanism or lever on a typewriter. For machines where the type element was fixed and the paper held in a moving carriage, this lever was operated after typing a line of text to cause the carriage to return to the far right so the type element would be aligned to the left side of the paper. The lever would also usually feed the paper to advance to the next line.

Now, typewriters need to advance one line (“line feed”) as well as reset their position to the far left of the paper (“carriage return”). The same exact mechanisms can be applied to your terminal too: these two operations are done through the characters \n and \r. Nowadays, most systems consider \n the equivalent of \n\r, but understanding how these characters work is important to fully grasp how to replace a character in your terminal: \n will “move the cursor down one line”, while \r will move it all the way back to the starting position of the current line.

With this understanding, we will now be able to create a CLI spinner using this simple loop:

The simple example I’m going to use is written in Go, but you could build it in virtually any programming language. What we need to do is to simply start with a list of characters, then print one of them at a time, followed by a carriage return, so that the next character will be printed in place of the current one:

And the result is this beauty: