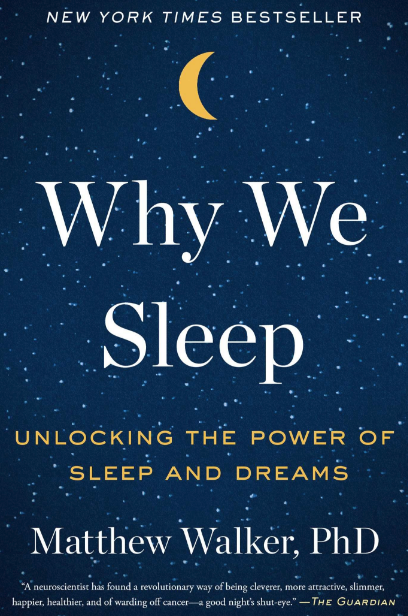 I never started any of my book reviews with a “book of the year” disclaimer, but this deserves as much of your attention as I can grab: a book that’s so simple, yet so revolutionary, tackling one of the most boring aspects of our life.

I used to think sleep was quite of a useless phase in our lives, there so that we can simply recharge our batteries and go on the following day — and this book managed to radically change my view on the importance of sleep: it’s a scientific take on the process of sleeping, how it impacts and shapes us, giving you a 360 degree overview on the consequences of a chronic lack of sleep.

As I mentioned in my previous post, I started beefing up my reading list based on suggestions from internet personalities’, and this came straight from DHH:

I attribute a significant share of my best ideas, sustained motivation, and life satisfaction with getting all the sleep the body and brain asks for whenever possible (8.5-9.5 hours per night most nights). Cheating sleep is the dumbest game. You will lose. https://t.co/p4CjE8p7Qi

Later in the 3d, DHH suggests to check this book, so I got a bit curious and bought it — what a great decision.

Long story short: it’s insane how much sleep impacts our life — it’s not just our energy level, but things such as (but not limited to) our ability to absorb knowledge, understand other people’s facial emotions, solve problems and regain memory. I particularly enjoyed the down-to-earth tone the author carries throughout the book and the fact that you can easily understand the mechanics behind sleep even though the subject is very “technical”.

Some interesting quotes from the book — but, trust me, there’s so many it’s not even fun:

It is disquieting to learn that vehicular accidents caused by drowsy driving exceed those caused by alcohol and drugs combined.

As one sleep scientist has said, “If sleep does not serve an absolutely vital function, then it is the biggest mistake the evolutionary process has ever made.”

An adult’s owlness or larkness, also known as their chronotype, is strongly determined by genetics. If you are a night owl, it’s likely that one (or both) of your parents is a night owl.

The night owls in the group would not be going to sleep until one or two a.m., and not waking until nine or ten a.m. The morning larks, on the other hand, would have retired for the night at nine p.m. and woken at five a.m. Consequently, the group as a whole is only collectively vulnerable (i.e., every person asleep) for just four rather than eight hours, despite everyone still getting the chance for eight hours of sleep. That’s potentially a 50 percent increase in survival fitness. Mother Nature would never pass on a biological trait—here, the useful variability in when individuals within a collective tribe go to sleep and wake up—that could enhance the survival safety and thus fitness of a species by this amount.

For every day you are in a different time zone, your suprachiasmatic nucleus can only readjust by about one hour.

Scientists have studied airplane cabin crews who frequently fly on long-haul routes and have little chance to recover. Two alarming results have emerged. First, parts of their brains—specifically those related to learning and memory—had physically shrunk, suggesting the destruction of brain cells caused by the biological stress of time-zone travel. Second, their short-term memory was significantly impaired.

What percent of sleep will you lose? The logical answer is 25 percent, since waking up at six a.m. will lop off two hours of sleep from what would otherwise be a normal eight hours. But that’s not entirely true. Since your brain desires most of its REM sleep in the last part of the night, which is to say the late-morning hours, you will lose 60 to 90 percent of all your REM sleep, even though you are losing 25 percent of your total sleep time.

When it comes to information processing, think of the wake state principally as reception (experiencing and constantly learning the world around you), NREM sleep as reflection (storing and strengthening those raw ingredients of new facts and skills), and REM sleep as integration (interconnecting these raw ingredients with each other, with all past experiences, and, in doing so, building an ever more accurate model of how the world works, including innovative insights and problem-solving abilities).

Alcohol is one of the most powerful suppressors of REM sleep that we know of.

deep sleep may be a driving force of brain maturation, not the other way around.

That older adults simply need less sleep is a myth.

following a night of sleep you regain access to memories that you could not retrieve before sleep.

Sleep powerfully, yet very selectively, boosted the retention of those words previously tagged for “remembering,” yet actively avoided the strengthening of those memories tagged for “forgetting.” Participants who did not sleep showed no such impressive parsing and differential saving of the memories.

In the Northern Hemisphere, the switch to daylight savings time in March results in most people losing an hour of sleep opportunity. Should you tabulate millions of daily hospital records, as researchers have done, you discover that this seemingly trivial sleep reduction comes with a frightening spike in heart attacks the following day. Impressively, it works both ways. In the autumn within the Northern Hemisphere, when the clocks move forward and we gain an hour of sleep opportunity time,

remarkable discovery in 2002 demonstrated that sleep profoundly impacts your response to a standard flu vaccine. In the study, healthy young adults were separated into two groups: one had their sleep restricted to four hours a night for six nights, and the other group was allowed seven and a half to eight and a half hours of time in bed each night. At the end of the six days, everyone was given a flu shot. In the days afterward, researchers took blood samples to determine how effective these individuals were in generating an antibody response, determining whether or not the vaccination was a success. Those participants who obtained seven to nine hours’ sleep in the week before getting the flu shot generated a powerful antibody reaction, reflecting a robust, healthy immune system. In contrast, those in the sleep-restricted group mustered a paltry response, producing less than 50 percent of the immune reaction their well-slept counterparts were able to mobilize. Similar consequences of too little sleep have since been reported for the hepatitis A and B vaccines.

mice were first injected with malignant cells, and tumor progression was then tracked across a four-week period. Half of the mice were allowed to sleep normally during this time; the other half had their sleep partially disrupted, reducing overall sleep quality. The sleep-deprived mice suffered a 200 percent increase in the speed and size of cancer growth, relative to the well-rested group.

One of the earliest studies found that using an iPad—an electronic tablet enriched with blue LED light—for two hours prior to bed blocked the otherwise rising levels of melatonin by a significant 23 percent.

we have since discovered that under-slept managers and CEOs are less charismatic and have a harder time infusing their subordinate teams with inspiration and drive. Unfortunately for bosses, a sleep-deprived employee will erroneously perceive a well-rested leader as being significantly less inspiring and charismatic than they truly are. One can only imagine the multiplicative consequences to the success of a business if both the leader and the employees are overworked and under-slept. Allowing and encouraging employees, supervisors, and executives to arrive at work well rested turns them from simply looking busy yet ineffective, to being productive, honest, useful individuals who inspire, support, and help each other. Ounces of sleep offer pounds of business in return.

I could go on and on and on… …do me a favor instead: buy the book and enjoy what I consider my read of the year.