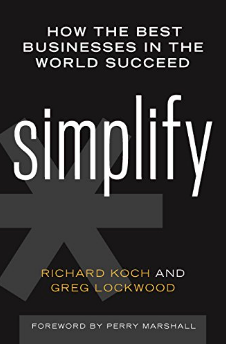 Something I’m extremely fascinated with is the power of simplicity: I’ve found myself fighting complexity far too many times, and always realized that when planning and developing a system, we’d achieve the best results when keeping things simple.

What’s more interesting, simple systems could be combined together to kind of form more structured organizations that would still benefit from their straightforward pillars.

Naturally, my curiosity evolved over time and I wasn’t keen on confining to the tech field — so once I saw this book, I thought I’d like to see if businesses have similar tendencies to the systems we build with code.

“Simplify: How the Best Businesses in the World Succeed” is a very interesting read: it starts by introducing great simplifiers such as Henry Ford or Ingvar Kamprad (founder of IKEA), describing their ascent into their respective industries. The book quickly jumps to the conclusion that there are 2 strategic ways to simplify:

Now…this is where the book kind of stops: after introducing the 2 different ways of simplifying it goes on and on about numbers such as revenue growth of simplifiers vs competitors and so on — it gets fairly boring at some point :) overall I think part of the book could have been trimmed down in favor of the examples and anectodes (which are amazing).

All in all, I would recommend this book as it’s cost-effective as well as well-written — you might get bored at some point in the final couple of chapters: if so, feel free to skip ahead!

A few interesting quotes from the book:

The real breakthrough came with a proprietary innovation, designed by his production managers: the move from batch production to a continuously moving assembly line. This didn’t happen until 1913, and it was then that Ford famously insisted that all of his cars would be painted black, because only Japan black paint could dry quickly enough to keep up with the speed of the line. The effect of simplification and scale was to move the price of a Model T down to $550 by 1914, when 248,307 of them were sold. By 1917, the price had fallen even further, to $360, with the result that sales soared to 785,432. In 1920, 1.25 million Model T’s were bought. Compared to 1909, a price reduction of 63 percent — to almost a third of the original price of the Model T, which was itself a good fifth cheaper than comparable cars — had resulted in a sixty-sevenfold increase in the number of cars Ford sold.

Product design is nearly everything in proposition-simplifying. The objective is to make the product a joy to use: first and foremost, easier to use; then, if possible, more useful and more aesthetically appealing.

It seems that firms develop their own rules of thumb about acceptable margins and then become addicted to them. So, if simpler, lower-margin products come along it is hard for any successful company to embrace them and realize that, although the margins are lower, the overheads are too. New entrants with simpler products do not have the handicap of success in more complex, more profitable products, and the overhead and margin assumptions that such success generates.

Once the iPod project was launched, Jobs immersed himself in it daily. His main demand was “Simplify!” He would go over each screen of the user interface and apply a rigid test: he should be able to get there in three clicks. And the click should be intuitive. If he couldn’t figure out how to navigate to something, or if it took more than three clicks, he would be brutal.