After a great, as usual, monday-mini-hackaton with my colleague David, I’m happy to announce that Orient has reached its fourth beta: instead of a generic post, I will describe here, step by step, which amazing things you’ll be able to do with this new release :)

Data mapping all the way

The biggest feature of this beta-4 is the amount of work done in the Data Mapper: you are now able to hydrate POPOs with a few data types:

To map them, with annotations, is pretty easy:

where name is the name of the attribute in OrientDB and type the porting of OrientDB types in PHP: primitive types are pretty similar ( float is float, integer is a value casted with (int) and so on ).

Lazy loading has already been implemented: this means that, if you hydrate through the mapper an object with no related record, but only references to them like

and you call $object->getRelatedRecord() the related record is lazily fetched.

Orient’s lazy loading is a mix between Closure-based and code-generation-based LL: once we started trying the Closure implementation, we noticed that there were too many limitations from a developer’s point of view ( too much end-developer code to write ), so we started looking at Doctrine2’s implementation, which is done using code generation through proxy classes.

The idea is really awesome ( I will blog about that later on ) and we were about to start implementing code generation while we realized that using Proxy classes would have seriously limited Orient potentialities: since we don’t always know the class of the records connected to our sample record, we could not implement a proxy without forcing the user to explicit the “class” of the related records, which rapes one of the most interesting features of OrientDB, cluster ( = table ) inheritance.

Cluster inheritance means that if I have a record of type Menu, he can have a relations Items with records of type ExternalLink, NewsLink, ProductLink and so on ( an issue I already discussed ): since we don’t want to use OrientDB in the wrong way – because the motivation which pushed us to use OrientDB was that we were using RDBMS for doing the wrong things – we decided to pollute the end-developer’s resulting POPOs instead of loosing such a feature.

Polluting POPOs means that, if you want to retrieve a link, or a series of links, you have 2 choices for writing your getters:

which would have eventually helped us in implementing Doctrine2’s proxies, but, as you see, things become ridicolous as your domain grows.

Thanks to Daniele Assandri’s patch, we managed not to restart the curl client at every requests of the HTTP binding: this means faster requests, thus faster responses.

In a couple of intense coding sessions we managed to cover almost every class of the library with a unit test: this does not mean we have 100% code-coverage and the software is bug-free, but that’s a good starting point.

We added the TRUNCATE command, which is used to truncate records, classes or – also – clusters:

Put quality back into LoCs

We are not PHP gurus ( I will never define myself guru in any context ) but we tried to follow a few metrics in order to mantain the internal quality of the software pretty high: if you take a look at what PHPLoC outputs, you will notice that cyclomatic complexity is low and static methods are not as used as you might think: 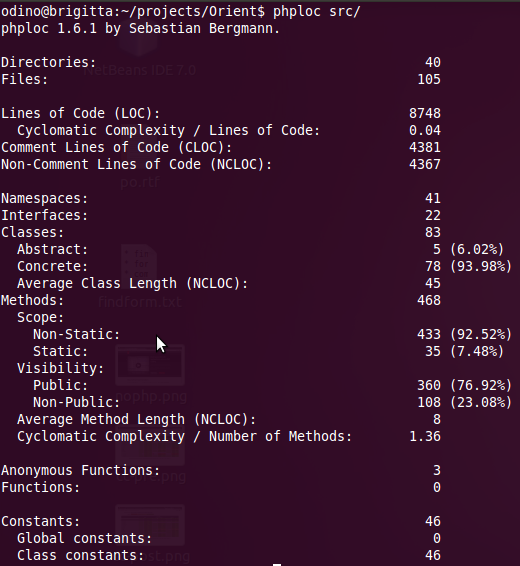 Since PHP allows you to insert a constructor in an interface, we started adding them, but we eventually noticed that they limit extensibility.

Ok ok, RC5 is out, and we will adjust the compatibility with it in the beta-5 release: the good news is that, as OrientDB goes on, we don’t stop and tests are always green :)

Minor tweaks to the mapper

Like, for exampe, less coupling to the HTTP protocol and an interface for protocol adapters: the latter is one of the most crucial parts of the library, because the adapter let’s you use the data mapper and the query builder with any protocol supported by OrientDB ( HTTP or binary ).

We’re already working on the beta-5 release, which will be a relaxing release ( a few refactorings, a couple of other issues ): bare in mind that implementing doctrine/common’s persistence interfaces is in our plans, and will probably become real in this next beta.

The next one, beta-6, will deal with the last hard thing, persisting POPOs to OrientDB: probably the most difficult thing in the whole library, we are thinking about implementing the Unit Of Work there.

So, so, so… May I say that the first RC is targeted during Christmas? :) I said it!