I know, I’m a month late, but I need to publish a report about this amazing conference which took place in Antwerp, Belgium, in January 2011.

It has been one of my favourite conference, and the reasons for such this kind of evaluation are multiple: I try to summarize them here.

This is probably the conference in which I did the rightest moves: almost every talk I attended impressend me so much.

We had great lunches, an awesome dinner offered by Facebook and almost everyday a free bar.

The location they choose was ok and the talks organization really pleasant.

I should tell a lot about that night, but I’d rather keep some details with those who were there :–)

We had free ber offered by GitHub and a bunch of bowling lanes reserved for the conference attendees.

It was also cool because at this conferences speakers tend to aggregate with theirselves: at this one we had he opportunity to bowl together.

I’ve been there with other italian fellas, and we probably were the farest guys from home (except from a few speakers ).

Really great time spent together, and I also appreciated Michelangelo Van Dam, one of the organizers, thanking us, while smoking a cigarette, for coming there.

Definitely going there in 2012.

There is one more thing… 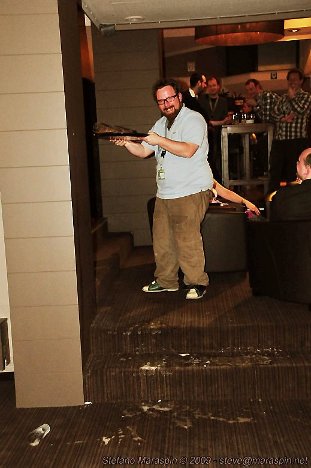